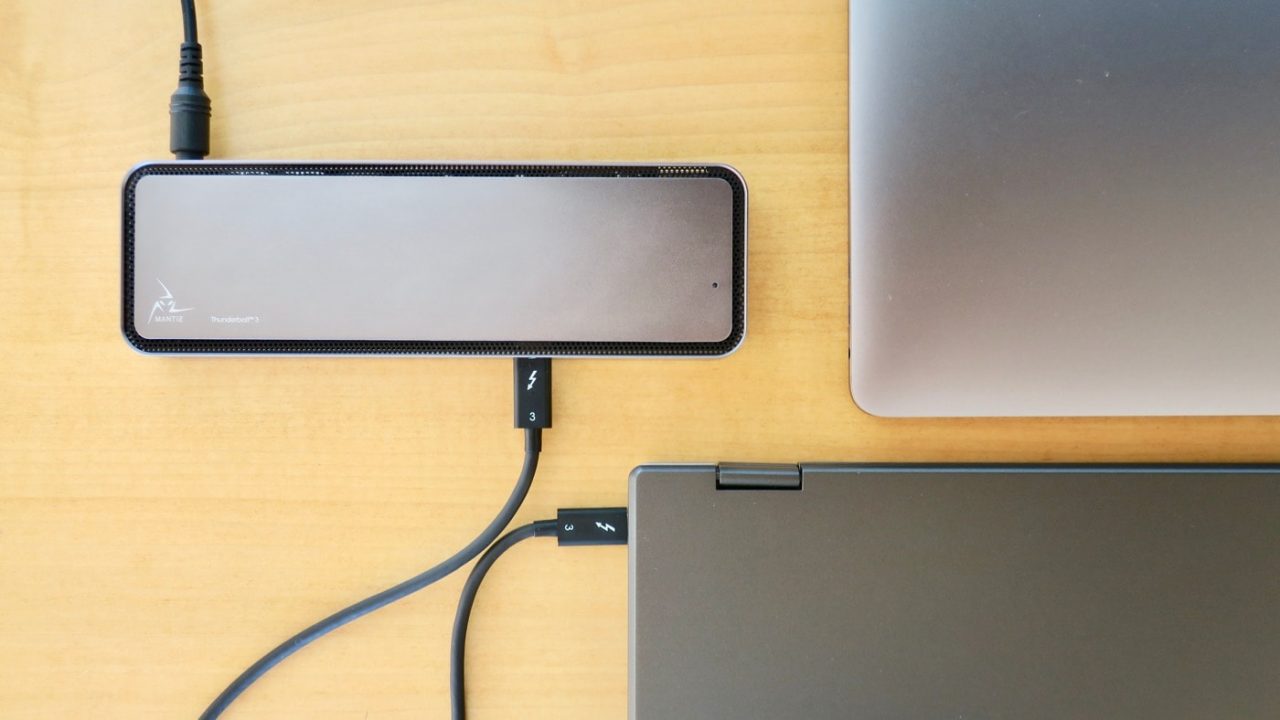 Apple’s obsession with the “less is more” philosophy has reached an epic level. When the Thunderbolt 3 MacBook Pro lineup was introduced in late 2016, many decried the imposition of dongle life. The outrage was real. For most customers, fewer ports mean more costs. When your new Mac laptop only has USB-C/Thunderbolt 3 connectivity, your existing peripherals need dongles and plenty of them. Even the mighty Apple felt bad enough to offer an early-adopter discount on many USB-C/Thunderbolt 3 adapters. People cried a bit less, but the pain still lingered.

Eighteen months have passed since the Thunderbolt 3 MacBook Pro launch. While computer peripherals with USB-C/Thunderbolt 3 connectivity are increasingly common, there’s still the hassle and expense of making sure you have the right adapters for travel. Enter the Mantiz Titan, a Thunderbolt 3 docking solution that works as hard at home as it does on the road. The design aesthetic and matching space gray finish of this dock show its intention of being an inseparable companion to the MacBook Pro.

The Mantiz Titan Thunderbolt 3 dock is a handsome piece of kit. The diminutive footprint fits nicely in the palm of your hand. Similar to the Venus eGPU enclosure, this Titan TB3 dock is constructed using aluminum and is anodized in space gray to match the finish of Apple’s newest “pro” Macs. The bottom cover is a light gray rubberized layer to keep the dock planted on a desk surface. It feels very similar to the rubber bottom of the retired white unibody MacBook. Mantiz managed to get the look and feel within striking distance of the MacBook Pro.

My only criticism is the panel gaps between the ports and their cutouts. Keep in mind my media sample is not the final production unit. The white line markings over Ethernet, VGA, DP2, HDMI, and USB 2 will be removed in the final product. These markings serve to indicate the ports that don’t require the use of the power adapter. Unfortunately Intel & Apple did not sanction this USB bus-powered mode. Therefore the production units can only work with the power adapter plugged in. A nice accessory that comes with this TB3 dock is the microfiber carrying pouch. It’s roomy enough to store the dock and its half meter Thunderbolt 3 cable.

fits in the hand = travel friendly

At the front of the dock is the sole Thunderbolt 3 port. All expansion ports are in the rear. The first time I saw the layout, I immediately asked about the need for VGA output instead of DVI. Mantiz mentioned VGA is still a widely-used projector input. Apple itself has a USB-C adapter with VGA output. Mantiz more than made up for including an analog video output by providing three digital video output ports in the form of two DisplayPort 1.2 and one HDMI 2.0a. The Titan is capable of handling two 4K @ 60Hz monitors simultaneously by connecting both DisplayPorts or DisplayPort + HDMI port.

The data transmission expansion ports are two USB-A 3.0 and one gigabit Ethernet port. I wish there were more than two USB ports. The LAN port is nice to have, but a memory card slot would have been more beneficial. The SD slot was one of the more useful I/O in the retina MacBook Pro lineup. Furthest to the right of the rear I/O ports is the power plug. The Mantiz Titan comes with a 120W power adapter (19V 6.32A). This power brick is similar in volume to the dock but shorter and wider. Mantiz chose this PSU in order to provide 87W power delivery to match the requirement of the 15″ Thunderbolt 3 MacBook Pro.

I’ve been using this Mantiz Titan Thunderbolt 3 dock for over a month. I took it on a three-day trip and got to use the dock in different arrangements. It really made Thunderbolt 3 technology look good. The two host computers I brought with were the late 2016 15″ Apple MacBook Pro and the 2017 12.5″ Toshiba Portege X20W-D. In short, the Mantiz Titan was essentially plug-and-play in both macOS High Sierra and Windows 10.

In Windows 10 [1709], there was no need to install any drivers. All functionalities of the Mantiz Titan Thunderbolt 3 dock worked as soon as I plugged it in. It was a pleasant surprise when macOS High Sierra [10.13.4] behaved the same way. I had concerns with whether the LAN port would work right out of the box. The Ethernet Controller is Intel I210 that works natively in macOS. Power delivery is confirmed at 87W as seen in macOS System Information » Power tree. I also checked the Thunderbolt version of this dock and it’s 29.1.

During testing of display outputs through the four available video ports, I learned about the two display channels and their arrangement. Channel 1 powers the VGA and DP2 ports while Channel 2 handles DP1 & HDMI ports. Each channel is only able to provide video output to one port at a time. For example, when you plug in VGA & DP2 concurrently, only DP2 will work. Similarly with channel 2, DP1 & HDMI inserted at the same time results in only DP1 having output. To get dual display output, you have to mix and match one port from each channel. Dual 4K @ 60Hz is only possible with the pairing of DP2 from channel 1 with either HDMI or DP1 from channel 2.

Another convenience Thunderbolt 3 technology has introduced is universal power delivery. I now only need to bring along the 120W power adapter for the Mantiz Titan. It can charge both of my TB3 laptops (and any Thunderbolt 3 or USB-C devices for that matter). This non-proprietary charging feature makes not having the MagSafe port on the latest MacBook Pro suck less. Due to no moving components, there’s no noise emission. On occasions, the top of the dock got warm to the touch but nothing was out of the ordinary.

A fair question to ask is what advantage a Thunderbolt 3 dock like this Mantiz Titan offers over a USB-C dock to demand the higher cost. Due to Thunderbolt 3’s much higher bandwidth compared to USB-C, there are two main advantages. The first is dual 4K @ 60Hz output. The second is concurrent use of two external solid state drives without one impinging on the other. Another extreme example would be the use alongside an external GPU. We’ve learned first generation eGPU enclosures with expansion I/O suffer from mouse and keyboard input lag. Connecting peripherals to a dedicated Thunderbolt 3 dock would afford full bandwidth for the external GPU and therefore maximize performance.

Taking the form of a Thunderbolt 3 expansion dock, the Mantiz Titan gives extra oomph to slender ultrabooks. It plays well with many peripherals and provides interconnectivity anywhere, anytime. Versatility is at the heart of the Mantiz Titan. At $219 MSRP, this TB3 dock is a great value as of spring 2018. Apple’s Thunderbolt 3 Macs have undoubtedly donglified the simple life. The Mantiz Titan helps in simplifying the dongle life.