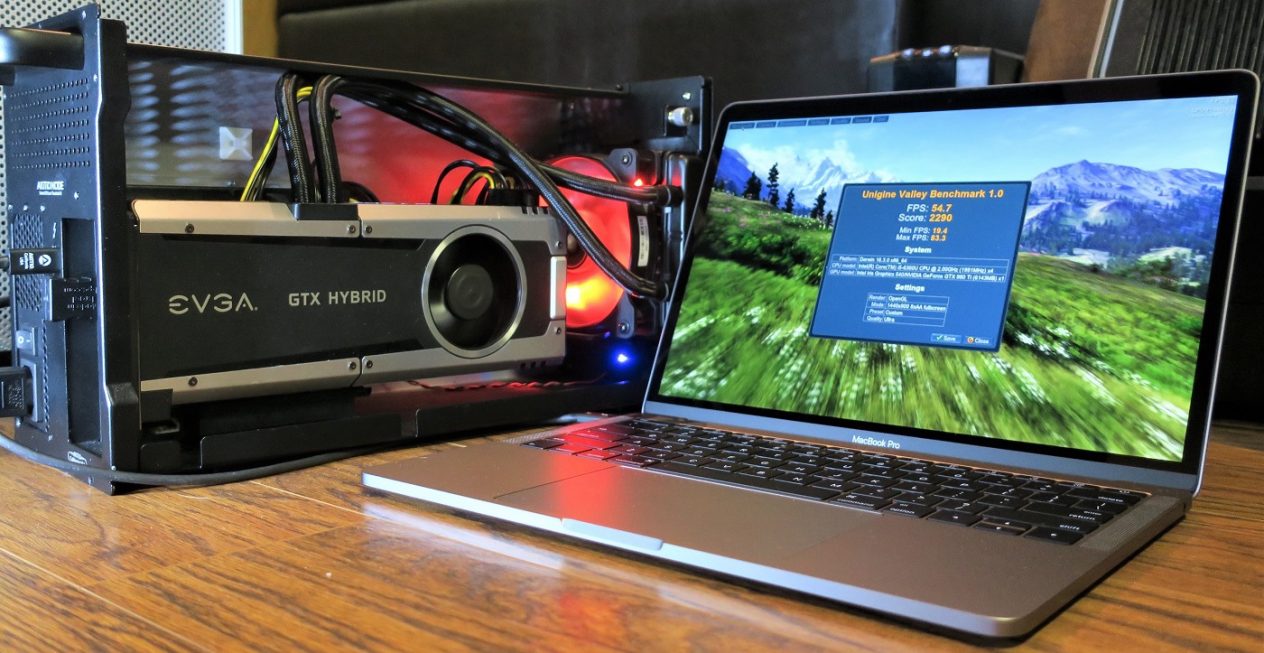 You’ve seen an external graphics card (eGPU) working with a Mac and looked into getting one but quickly realized it’s a confusing process. I was in your shoes. I spent hundreds of hours learning everything I could find about external GPU and how to set one up with my MacBook Pro. Through this endeavor, I became acquainted with two renowned eGPU pioneers and experts, Nando and Goalque. Together we built eGPU.io, the first and only dedicated forum for external graphics card.

My goal with this post is to provide a comprehensive beginner’s setup guide so that Mac users can build an external GPU for their computers. As new Macs and Thunderbolt eGPU enclosures become available, I will update this guide with the latest information. To get started, you’ll need the following hardware:

External graphics cards work with all Thunderbolt-equipped Macs. A 2011 MacBook Pro with the first generation Thunderbolt and the latest 2016 MacBook Pro with Thunderbolt 3 can both harvest the power of an eGPU. In my experience, a Mac with only integrated graphics is easier to set up with an external GPU. Mac models with an asterisk (*) denote they have discrete graphics as a standard feature. The table below details all Mac computers with Thunderbolt connectivity.

Before getting too excited about your Mac’s compatibility with eGPU, you should know that Apple never announced external graphics card capabilities as an official feature on its computers. Building and using an eGPU with your Mac is totally unsupported by Apple; the Genius Bar will definitely turn you away if you haul your external GPU enclosure into the Apple Store. eGPU.io Forum is the appropriate place to ask questions about your eGPU setup.

External GPU development in Mac OS has been a process of modifying system files to enable support for external graphics cards. Future versions of Mac OS may break the existing procedure to enable eGPU. For the time being, these three steps must be completed to have a fully functional eGPU:

Choosing a Thunderbolt 2 enclosure is very easy because there are only a handful. The AKiTiO Thunder2 PCIe Expansion Box is the most affordable and commonly used for eGPU builds. Other suitable TB2 enclosures for eGPU setup are: OWC Mercury Helios, Sonnet Echo Express III-D, Netstor NA211TB-LD.

You’ll have many more options for a Thunderbolt 3 enclosure. Since the arrival of the Late 2016 MacBook Pro in October 2016, it seems a new Thunderbolt 3 enclosure comes out every month. Intel is in high gear to promote the Thunderbolt 3/USB-C connectivity standard. Due to the thinner and lighter design language across the industry, the need for expansion enclosures is at an all-time high. Below is a list of the most popular Thunderbolt eGPU enclosures currently available in 2017.

I’ve been using the AKiTiO Node which is a ready-to-go eGPU enclosure. I reviewed this Thunderbolt 3 enclosure and highly recommend it for first-time eGPU builds. The AKiTiO Node is currently the most affordable solution and has space for almost every graphics card on the market including those with liquid cooling. It also has a built-in 400W power supply. Another important feature it has is the Texas Instrument TI83 USB-C controller. Thunderbolt 3 enclosures with TI83 controller are preferable due to native support in macOS Sierra 10.12. 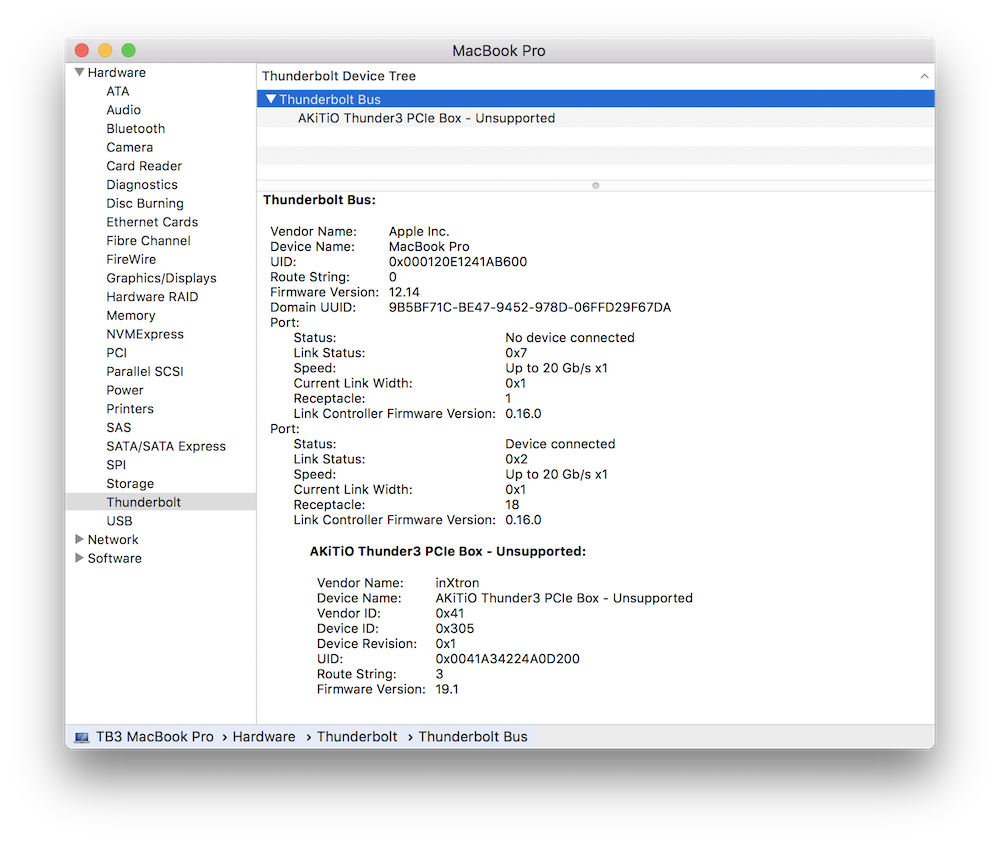 The next step is to make your Mac recognize there’s an external GPU attached to the enclosure. Goalque discovered the workaround and developed automate-eGPU script to make this process easy. The script modifies existing Mac OS system files to enable the recognition of an external graphics card connected through a Thunderbolt enclosure. automate-eGPU.sh v1.0.0 is the latest version which supports Mac OS 10.9 to 10.12. As mentioned earlier Apple has not officially released this eGPU feature for Mac, so this step will need to be completed every time you update Mac OS.

On April 11th, 2017 Nvidia released the long-awaited web drivers for Pascal graphics cards. The drivers are currently beta but nevertheless allow Macs to use GTX 10 series GPUs. Here is the list of graphics cards, sorted newest to oldest, that we’ve found to work with macOS Sierra 10.12.

Juice for your Apple

Most common problems with external GPU builds arise from an improperly paired power supply. Without adequate power, it will be a headache maintaining a functional eGPU. It’s best to use a Thunderbolt enclosure that has a built-in power supply with at least 350W. For Thunderbolt enclosures without a built-in PSU, you can either use a Dell DA-2 220W power brick (for GPUs requiring less than 150W TDP) or a 400W+ desktop power supply. The use of an external power supply requires power cable modifications which can be done through soldering of existing cables or buying pre-made cables. eGPU.io Forum has a section with discussions on eGPU power supplies and cables. 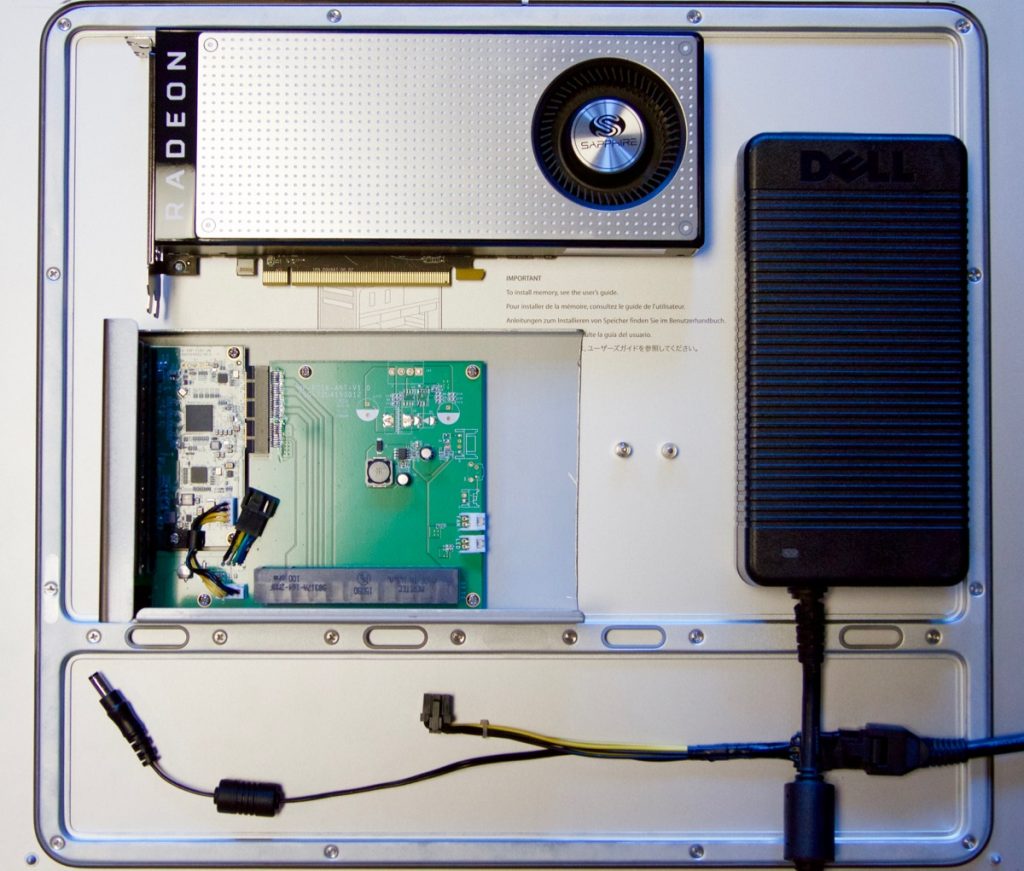 Once you have chosen and put together all hardware components for your Mac eGPU build, the next step is software installation in Mac OS. At this time, you cannot connect or disconnect the eGPU while your Mac is running. Connecting your Mac to the external GPU enclosure requires a cold boot. Disconnecting the external GPU enclosure while the computer is running will freeze the system and cause a kernel panic. Make sure to always shut your Mac down before unplugging the Thunderbolt cable.

With your Mac turned off, connect the Thunderbolt cable from your external GPU enclosure to your Mac’s Thunderbolt port. Turn the computer on once you’re hooked up. Open Terminal to download and run automate-eGPU.sh: 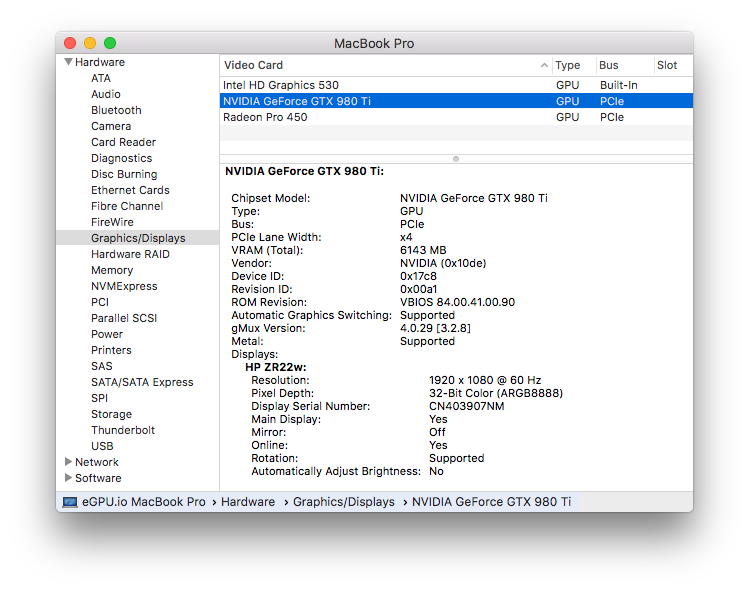 If all goes well, you should be able to see your graphics card running with Metal support in System Information > Graphics Cards/Displays. Connecting your external GPU setup to an external display will work similarly to this AKiTiO Node working with a Late 2016 MacBook Pro 15″.

Once your eGPU is up and running, you can continue using it with an external monitor or force the eGPU to accelerate the internal display of your Mac. If you go with the latter option, you will need a ghost video adapter such as fit-headless 4K HDMI adapter. The other one we found to be working are Bee Eater 4K Display Emulator.

With your eGPU running in Mac OS, follow these steps posted by Goalque to get internal display acceleration:

*Spectacle switches apps between displays in both Windowed and Fullscreen mode. Matching the ghost display’s resolution with the internal display using DisableMonitor is therefore recommended.

Best of luck on your external graphics card build! Please visit eGPU.io Forum to ask questions and share your successes. 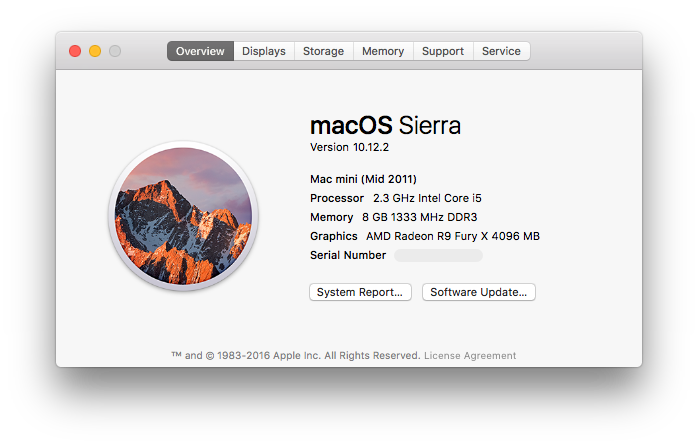 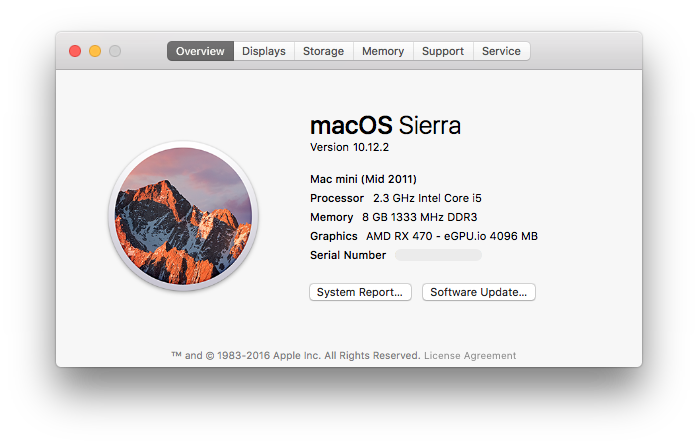 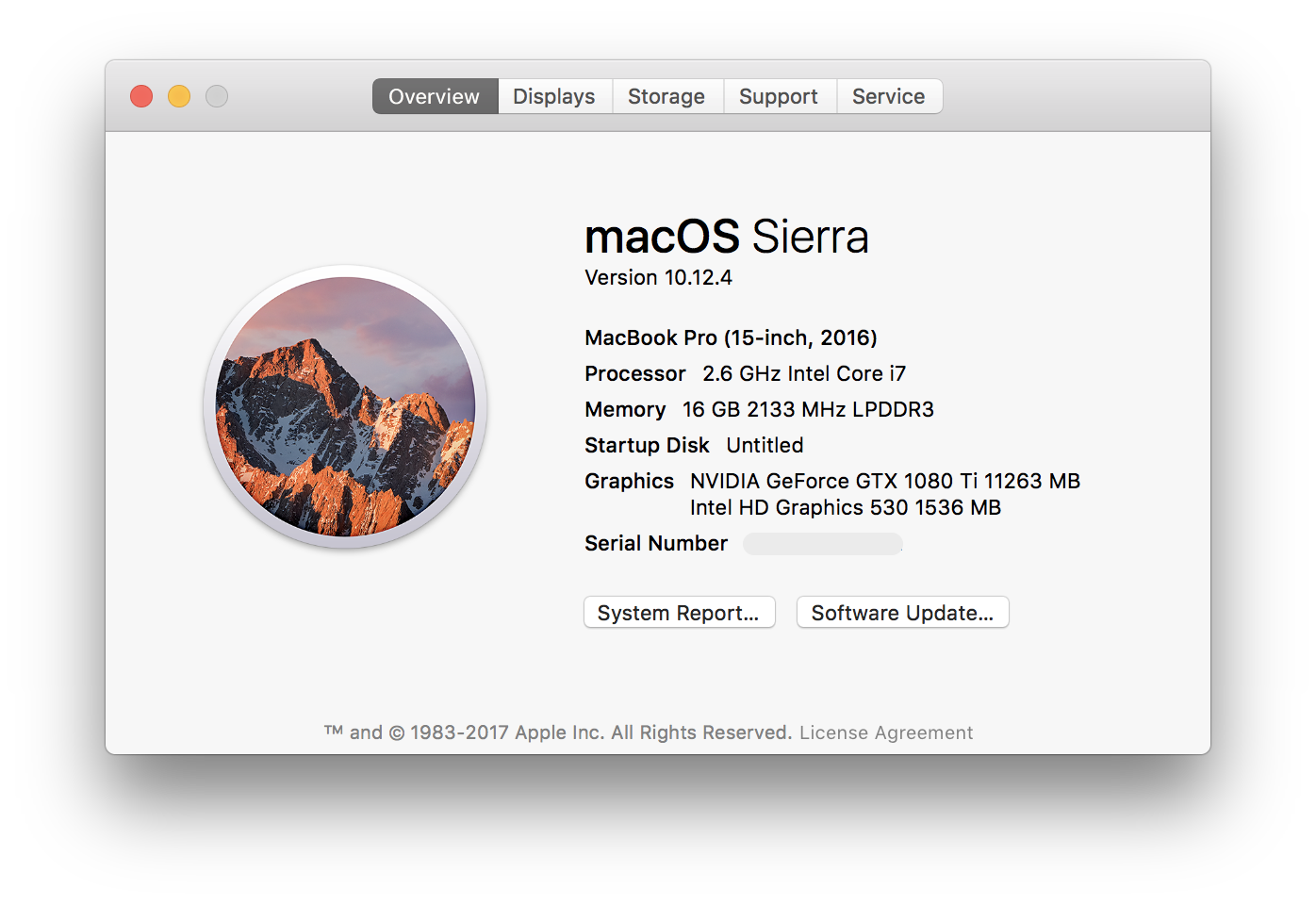 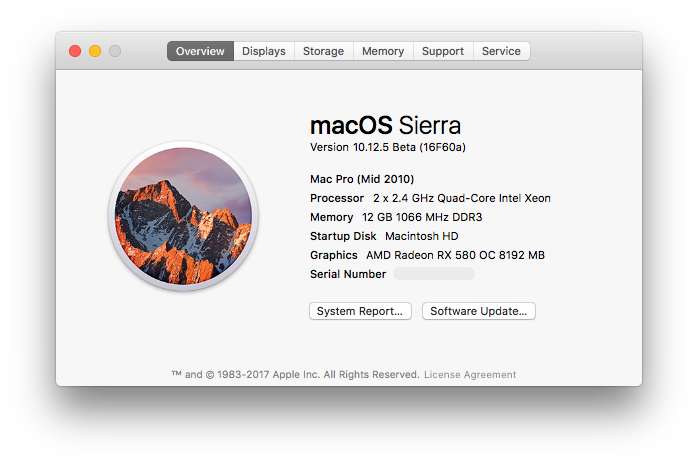 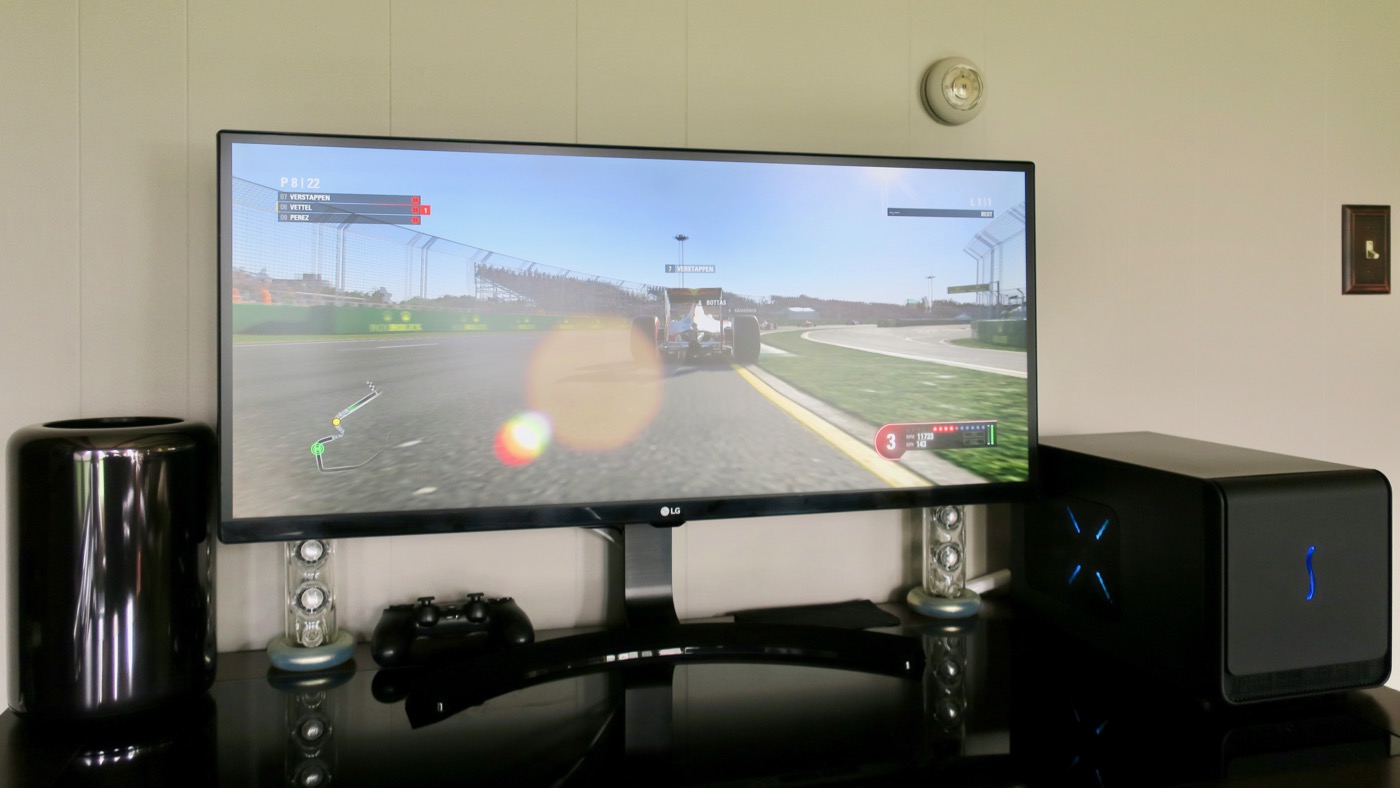